WASHINGTON, DC — The way Americans identify themselves ideologically has remained unchanged in 2021, continuing the narrow divide that has persisted in recent years between those who describe themselves as conservative or moderate, while a smaller share identify as liberal. On average last year, 37% of Americans described their political views as moderate, 36% as conservative and 25% as liberal.

Gallup’s political ideology trend, dating back to 1992, is based on annual averages of its nationwide, multi-day telephone surveys conducted throughout the year. The 2021 results encompass interviews with more than 12,000 American adults. Unlike party identity, which varied widely from quarter to quarter in 2021, Americans’ description of their political views on the conservative to liberal spectrum showed no significant movement throughout the year. year.

Over the long term, Americans’ political ideology did not vary much, but moderates were generally the leading group by a slight margin in most years from 1992 to 1998. Between 1999 and 2008, moderates and conservatives were roughly tied (within two percentage points of each other) – similar to the pattern from 2015 to present. In contrast, during a single period from 2009 to 2014 – the first six years of Barack Obama’s presidency – the conservatives held a slight advantage.

Half of Democrats still identify as liberals

The rise in Americans’ liberal identification since the early 1990s has occurred mostly among Democrats, but has leveled off in recent years. Last year marks the fifth year in a row that the percentage of Democrats describing themselves as liberal (50%) has been between 49% and 51% after reaching that point in 2017.

The 37% of Democrats identifying as moderates and 12% as conservatives are also consistent with Gallup’s findings over the past five years. 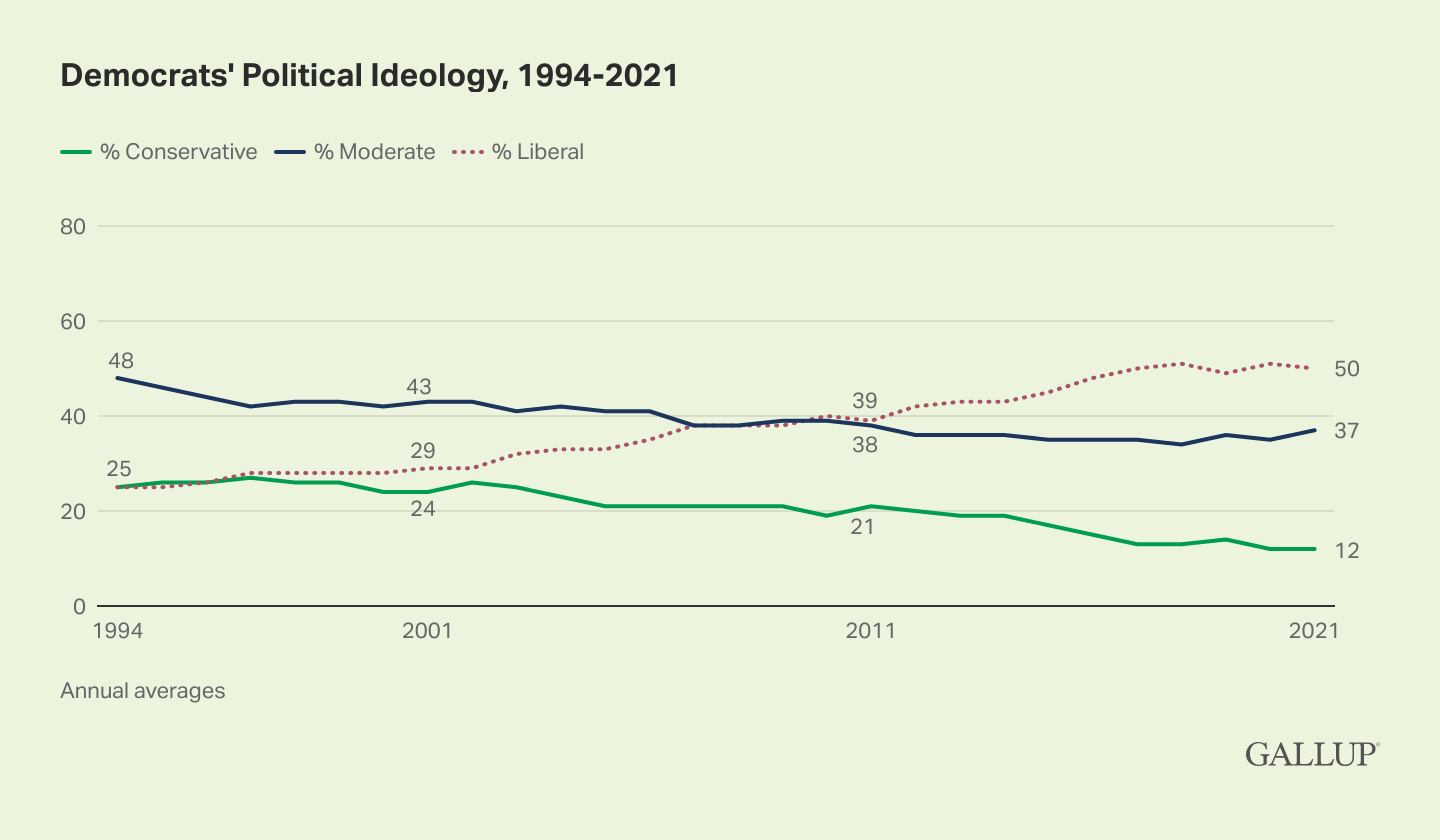 Line graph. Yearly averages from 1994 to 2021 in Democrat political ideology. The percentage identifying as liberal rose from 25% in 1994 to 50% in 2017 and has since remained near that level, including 50% in 2021. Meanwhile, the moderate and conservative percentages both declined and are now 37% and 12%, respectively. .

Opinions of independents were unchanged in 2021, with almost half (48%) identifying as moderate, 30% as conservative and 20% as liberal.

The position of independents in recent years has been similar to what it was in the 1990s and 2000s before becoming somewhat more conservative in the early and mid-Obama years. 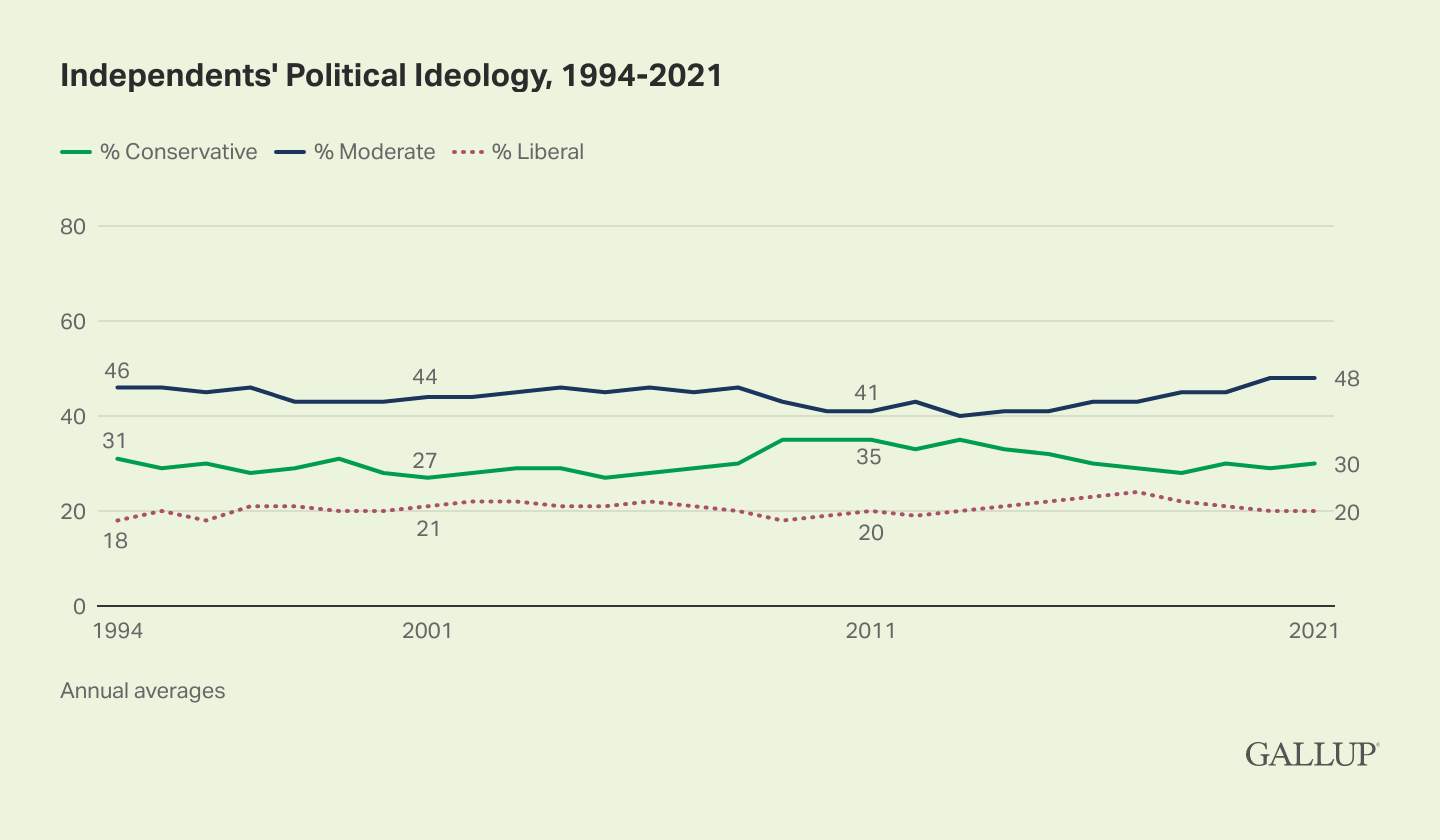 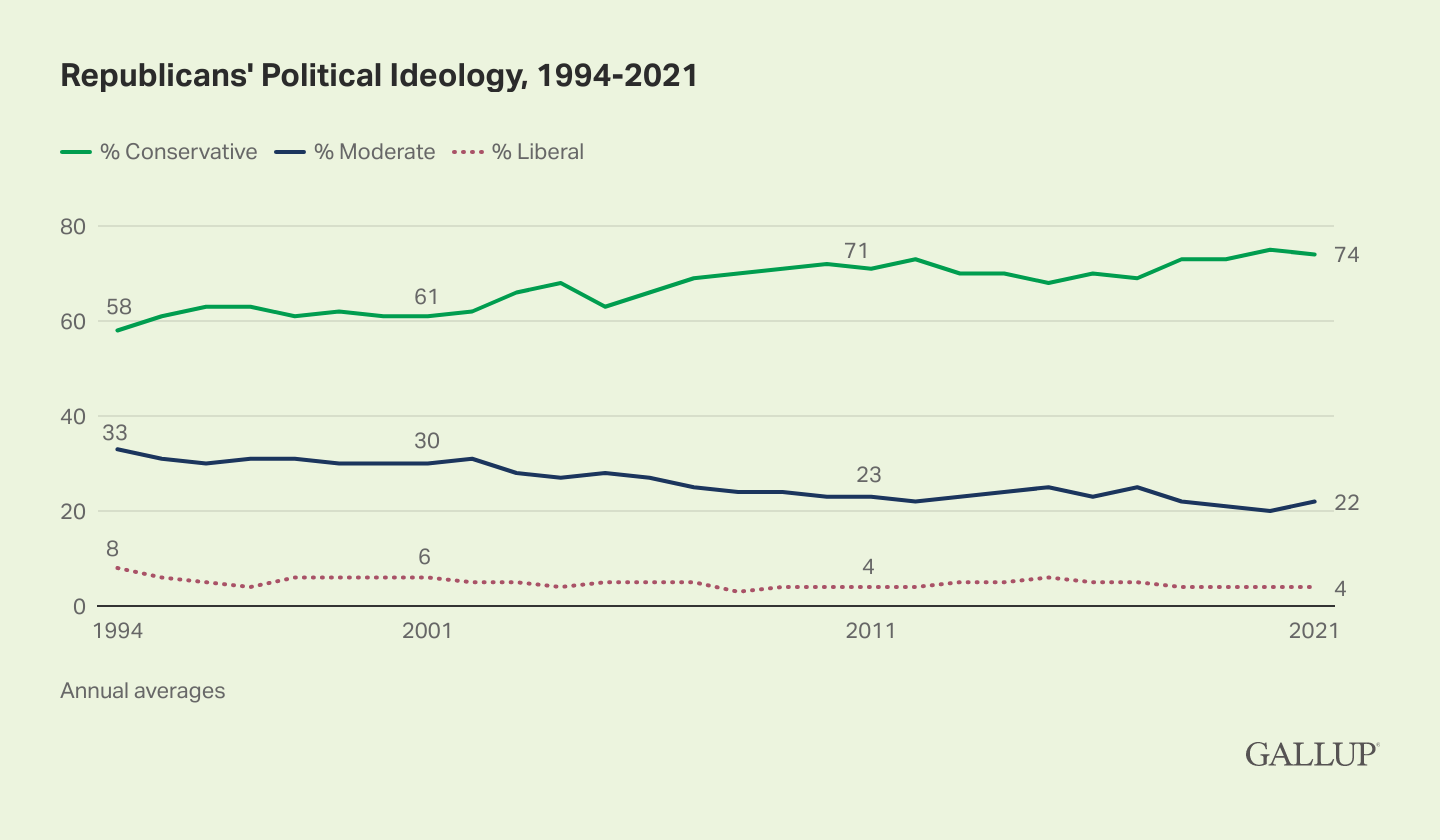 In addition to ideological differences by party, slight to moderate differences are observed by gender, age, education, race and geographic region.

Consistent with the Republican partisan orientation of these groups, men, older adults, white adults, those without a college degree, and residents of the South and Midwest are more likely to identify as conservative rather than liberals.

Their counterparts in the population are about as liberal as they are conservative in their political views (women, middle-aged adults, college graduates, Hispanic adults, and Eastern and Western residents) or have more liberal identifiers than conservatives (young adults, graduate students, and black adults).

Ideology does not vary by household income; the plurality of all major income groups identify as moderate, and the rest are more likely to be conservative than liberal.

Even as the country was embroiled in debates over COVID-19 policies, US election laws, government spending, and abortion, among other contentious issues, the general ideological outlook of Americans remained stable in 2021. As one seen in previous years, more than a third each continue to call themselves conservatives or moderates, and a quarter identify as liberals.

At the same time, Democrats continue to be roughly evenly split between those who identify as liberal versus moderate or conservative, reflecting the broader ideological diversity within the party. Republicans remain overwhelmingly conservative and independents continue to skew conservatives at the margins, but the largest segment is moderate.

Independents being the largest political group, and with more independents describing themselves as moderates than anything else, it can be increasingly difficult for the two main parties to hold political power when they pursue policies that are too far apart. middle. This may be one of the reasons why party control over the presidency and Congress has alternated as much as it has over the past 25 years.

To stay up to date with the latest information and updates from Gallup News, Follow us on twitter.

Learn more about how the Gallup Poll Social Series works.