Bharathi Anna, now CPM District Committee Secretary of Chengalpet District, explains why vision loss did not deter him from joining the party and how the disabled can make a difference in politics

BS Bharathi Anna was a second-year undergraduate (mathematics) student when he took his first steps towards a political career in 1989. Being exposed to left-wing ideology from school, he enthusiastically joined the Student Federation of India (SFI) – a student organization. affiliated with CPI(M) – as a member.

The intellectual debates within the organization had made him an avid reader, and the continuous work in the field drew him further into the realm of politics. Nearly 32 years later, he became secretary of the CPM district committee of Chengalpet district and he is the first disabled politician in Tamil Nadu to lead a district unit of a political party.

Hailing from Pakkam village near Marakkanam in Chengalpet district, Bharathi Anna had vision problems from an early age and wore thick glasses since he was in Class III. Despite these challenges, he not only completed his education but also actively pursued a political career.

“I moved to my village where, with the help of other members, I started working to establish the Democratic Youth Federation of India (DYFI),” he recalls. As caste outfits were only proliferating, it was really difficult to convey their ideology to the people as people often associated communism with extremism, says Bharathi Anna.

“We had to approach people individually and raise awareness. It was only after three years that we were able to create a presence in my village,” says Bharathi Anna. 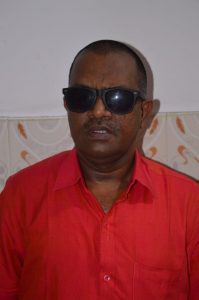 The intrepid field worker managed to create a DYFI presence in other villages as well. “Over the next few years, we took DYFI to about 30 to 40 other villages,” he says proudly. His hard work paid off as the party elevated him to the post of General Secretary of Maduranthakam.

Even though he had devoted his whole life to politics, his father, worried about his future, appealed to party members to allow him to study law. “Due to the compulsion of my father, I graduated from Ambedkar Law School in 1995. Again, I was involved with SFI and this period further shaped my ideas and beliefs” , did he declare.

After Bharathi Anna completed his studies, he decided to undergo intraocular lens surgery to improve his vision. “I had the operation in 1998 after getting several medical opinions and it helped me to see things clearly without my glasses. I was able to enjoy the birds flying high in the sky and I learned to ride a motorbike,” he recalls with a laugh.

More importantly, he no longer depended on anyone to drive him. And, he was able to get to the tough spots quickly and take charge of the situation, he says.

Meanwhile, Bharathi Anna was also simultaneously trying to embark on a career in law. Enrolling as a barrister, he started working as a junior for prominent lawyers before setting up his own office in Maduranthakam and Chengalpattu. But the job didn’t interest him after a while. So he joined The Untouchability Eradication Front, a CPM-affiliated organization in 2011 and began working with victims of caste issues.

Just when everything was going well, her life took a turn when her vision began to deteriorate. Initially he dismissed it as an illusion, but the deterioration was rapid. “At first, I had trouble reading the files. I rejected it thinking that I was not satisfied with my profession. But, after a while, I found it difficult to drive the vehicle and even to walk because I could only see up to a short distance,” he recalls.

He was reluctant to tell his family and friends about his condition. “It was hard for me to accept,” he says. On several occasions, he failed to recognize his friends, party members and others in public office due to his lack of vision and they took it as a form of arrogance, he recalls.

“I started to avoid receptions. I would only attend a reception if someone came with me and stayed with me. People got hurt and started avoiding me and the worst thing is that I started isolating myself and having depression,” says Bharathi Anna.

In fact, he had approached the party leaders to relieve him of his party duties due to his failing eyesight but the party refused. He remembers crying for long periods of time because he could not easily come to terms with his disability.

Bharathi Anna confessed his fears to his wife who suggested several other ways to regain vision. “But then I accepted my disability and got a disability ID card in 2018. It gave me confidence. I no longer panicked if I bumped into someone because the other person now knew I couldn’t see. Once I went public, my friends understood me, supported me and changed for me,” he says.

“This period was painful but I overcame it,” he recalls. Even during these difficult times, he continued to work for the victims of caste-based injustices in every way possible. He was later affiliated with the Tamil Nadu Association for the Rights of All Types of Disabled Persons and Caregivers (TARATDAC).

After three years, the district committee of the CPM party appointed him secretary at a meeting on January 10 and 11 this year and four out of five members voted for him. This is how he became district party secretary.

The CPM party is aware of all the hard work it has done. In a conversation with The Federal, CPM Secretary of State K Balakrishnan said of Bharathi Anna: “It’s not that he got the job all of a sudden. Bharathi Anna is one of the party’s longtime workers and has participated in several protests. He is one of the main party leaders in Chengalpet district. Moreover, he is also an efficient lawyer.

Previously, Bharathi Anna had served on the district executive committee of the party. Explaining that this loyal party worker has worked efficiently despite his disability, Balakrishnan says he has been up to date with all the technology to read and keep up to date. He was nominated by the outgoing secretary and the district committee voted and chose him as district secretary, he adds.

According to Bharathi Anna, many people with disabilities aspire to a political career, but society discriminates against them. He was often advised not to take risks by getting involved in political activities due to his medical condition. But he didn’t let that get in the way. His goal was clear, he wanted to show the world that he could make a difference despite his disability.