WASHINGTON, DC – Americans’ overall ideological views were about the same in 2020 as they were in 2019, with 36%, on average, identifying themselves as conservatives, 35% as moderates and 25% as liberals.

These results differ from Gallup’s mid-year report in June, which showed conservative identification was waning. After reaching an unusually high level of 40% in January and February, the â€œconservativeâ€ percentage fell to 34% in May and June. However, it then rose to 36% in the second half of the year, making the 36% average identify as conservative for all of 2020.

The 2020 results are based on combined data from 18 separate Gallup polls conducted between January and December, including interviews with more than 18,000 American adults.

The Conservatives’ 11-percentage-point lead over the Liberals in 2020 is comparable to the ideological tendencies of Americans between 2014 and 2019, when the lead averaged 12 points. The Conservatives’ advantage had been in the mid-to-upper teens over the previous few years, averaging 20 points from 1992 to 2005.

Although Americans as a whole are a mixture of ideological views, the two main political parties have become increasingly polarized over the years in their content.

The 51% of Democrats who identify as Liberals match the previous high for 2018, but they’ve been close to that high point for the past five years. The second largest group of Democrats are ideological moderates at 35%, followed by Conservatives at 12%.

While the conservative part of the Democratic Party is not negligible, it has more than halved over the past quarter-century, dropping 13 points since 1994. Moderates have seen a similar decrease, down 13 points, while the percentage of Liberals has roughly doubled. 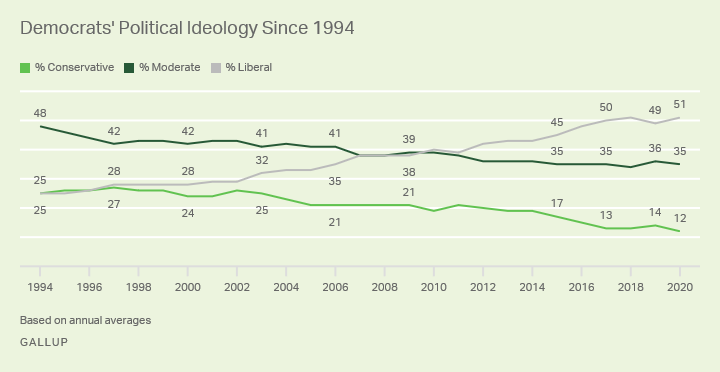 Ideological uniformity is much higher among Republicans, 75% of whom now consider themselves conservative, up slightly from 73% in 2019 and the highest proportion to date in the Gallup trend since 1994.

Meanwhile, one in five Republican describes his views as moderate, up from 33% in 1994, while just 4% say they are liberal, like most years. 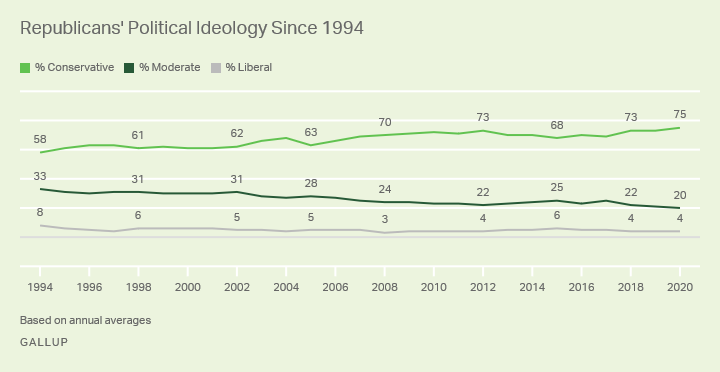 Line graph. Annual trend from 1994 to 2020 in the ideological views of Republicans, with 75% in 2020 identifying themselves as conservatives, 20% as moderates and 4% as liberals. A smaller majority of 58% was conservative in 1994, while most of the rest, 33%, were moderate and relatively few then, like today, were liberal (8%).

The plurality of independents continue to identify as ideologically moderate (48%), as they have throughout the Gallup trend, while the rest are tightly divided between conservatives (29%) and liberals (20%) . The opinions of independents have changed relatively little over the years. 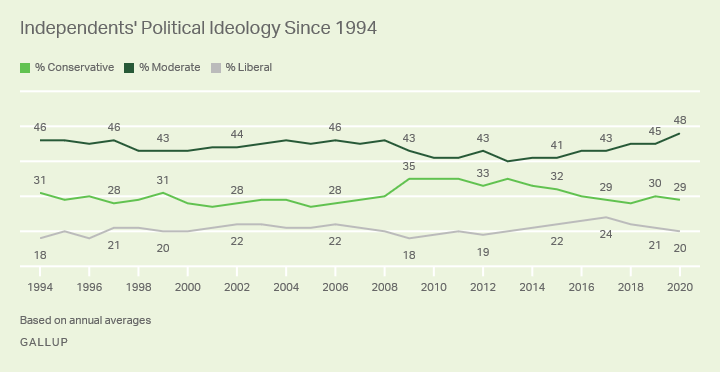 Line graph. Annual trend from 1994 to 2020 in the ideological opinions of independents, with 48% in 2020 identifying themselves as moderates, 29% as conservatives and 20% as liberals. This corresponds to the general trend observed since 1994.

President-elect Joe Biden takes office at a time when the two major political parties are closely matched, with 30% identifiers as Democrats on average in 2020, 29% as Republicans and 39% as independents. It is only by taking into account the leanings of independents that Democrats have a real advantage over Republicans in terms of national support, from 48% to 43%.

But Party ID does not tell the whole story of the nation’s political will, as there are ideological cross currents. While most Republicans identify as conservatives, a quarter have moderate or liberal views. And Democrats exhibit even more heterogeneity, with almost half identifying as moderate or conservative and the slight majority identifying as liberal.

Independents, on the other hand, are mostly moderate in their ideological views, which is where leaders seeking bipartisan support or hoping to unite the country may need to present their policy proposals.

Learn more about how the Gallup Poll Social Series works.