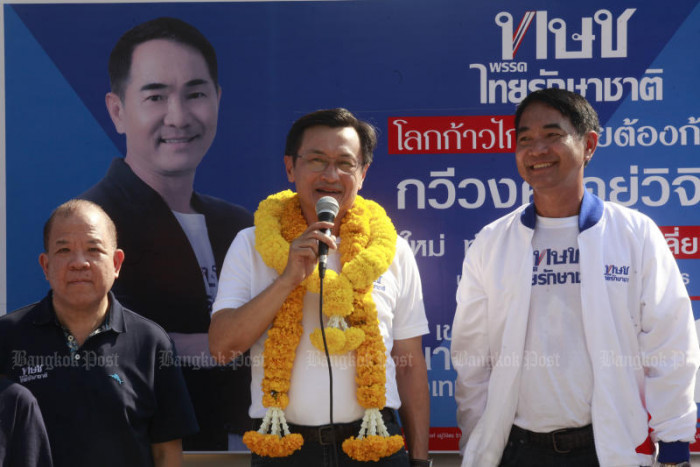 Chaturon Chaisang will unveil his new political party following the disbandment of the Thai Raksa Chart Party ahead of the 2019 general election. (Photo from Bangkok post)

Veteran politician Chaturon Chaisang will unveil his new political party, ending speculation about his career following the disbandment of the Thai Raksa Chart Party ahead of the 2019 general election.

The former Deputy Prime Minister and former chief political strategist of the late TRC wrote on his Facebook page that he is preparing for a party launch.

He said the party formation process had been going on for some time and there had been significant progress.

Mr Chaturon said he and his colleagues felt the time had come for them to move forward.

The country is going through a deep crisis due to the pandemic and a sluggish economy as the process of changing the charter stagnates, he said.

“In this situation, we agree that a political party is a forum and a tool for mobilizing people with a similar ideology to help solve the country’s problems.

“So we decided to go ahead with this party and prepare it for future political activities,” he wrote, adding that launching the party would be a simple matter due to the pandemic.

It was first known that Mr. Chaturon was forming a new party after admitting last year that he was in talks with a wide range of people who shared his passion to serve the country through the Politics.

Mr. Chaturon made his political debut in 1986 under the Democratic Party banner in Chachoengsao before moving on to the New Aspiration Party and the Thai Rak Thai Party.

Following the 2006 coup, he was appointed interim leader of the Thai Rak Thai party before the party was dissolved by the Constitutional Court in 2007.

He then joined the Pheu Thai party and defected to the TRC ahead of the 2019 elections.

Following the coup d’état of May 2014, Mr. Chaturon defied the summons of the perpetrators of the coup and was charged with inciting agitation in violation of article 116 of the Criminal Code following public statements against the military coup.

He was acquitted of all charges in December of last year.